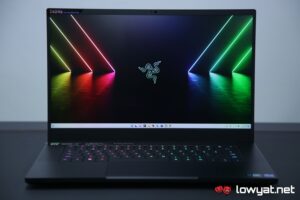 The Razer Blade 15 2022 may have been out since May this year, but the laptop is nevertheless a thin and light portable gaming and productivity machine that its parent company is still keen on pushing out to the masses. To state the obvious, this year’s model comes with a lot of upgrades, updates, and improved features, chief among them being an OLED panel.

But how much of an improvement to the overall experience are those changes to an ordinary consumer such as myself? Well, keep reading to learn what I found out about this iteration of the Blade 15.

As far as specifications go, the Blade 15 2022 that is currently in my lab is the second-best SKU under Razer’s lineup, by virtue of its QHD OLED display panel literally being the 2nd highest resolution on its product list, more so with its 240Hz static refresh rate. There are two other display options, the base model sporting a 360Hz Full HD panel and the top-of-the-line housing a 4K 144Hz panel.

The Blade 15 2022 is also available in a variety of discrete NVIDIA GeForce RTX 30 Series Mobile GPUs, ranging from the RTX 3060, RTX 3070 Ti, and RTX 3080 Ti. The latter being the discrete GPU that is underneath the hood of this laptop.

For another matter, the Blade 15 2022 model that is in my lab is also not the cheapest at RM17699. That’s an extremely high price to pay for a gaming laptop, even by today’s standards.

If you’ve ever had the luxury of owning a Razer Blade laptop, this part of the review is probably going to either sound familiar or dreary to you. In keeping with Razer’s minimalist philosophy for its laptops, the Blade 15 2022 continues the trend with its CNC-milled, all-metal, all-black chassis. Compared to the Blade 14 2022 that I reviewed earlier this year, though, the one obvious benefit to being a 15-inch portable gaming machine is that the engineers at the company’s lab have more space and leeway to work on the base.

Thanks to its larger and frankly, more common base, the Blade 15 2022 is able to accommodate a few more ports than the more compact Blade 14 lineup. I’m talking an additional USB-A port, as well as a full-sized UHS-II SDXC Card Reader on the side. That last feature is actually useful to me, primarily due to the fact that I virtually take a lot of my product shots with a DSLR and frankly, it’s a relief to not have to whip out my SD card adapter every time I need to transfer out my photos from card to PC.

Still on the subject of the Blade 15 2022’s I/O, the USB-C ports are also Thunderbolt 4, obviously due to the fact that the laptop is running on Intel’s 12th Gen Alder Lake chipset. Sure, it’s a feature that is currently afforded to Intel-powered laptops, but that doesn’t detract from the fact that having them is a boon, in and of itself.

Underneath the hood,  the guts of the Blade 15 2022 are just as compact as any gaming laptop I’ve seen, but the good news here is that, again, thanks to the extra room, there is space for an additional M.2 storage slot. Meaning that you can install another PCIe Gen4 SSD with capacities of up to 2TB, should you feel the default 1TB isn’t enough.

Moving on, there is also the 15.6-inch OLED display panel is another improvement that the Blade 15 2022 provides. Honestly, I can actually see a difference in visual fidelity versus the standard IPS panels that my daily driver, the Blade 14 Ryzen 2021, uses. More on that in the next section.

There are also the same creature comforts on the Blade 15 2022, that you’ll actually find across the board with all Razer laptops made this year. For example, the speaker grilles on the sides are now machine drilled directly into the chassis, instead of it being a spare part. Honestly speaking, I think it fits the minimalist aesthetic much, much better.

You also get the same per-key RGB keyboard, where its lighting functions can be changed via Razer’s very own software-based Synapse 3 controls. Although this feature really hasn’t changed for the better part of two generations. Oh, and then there’s the precision glass trackpad. Lastly, powering up the whole laptop is an 80WHr lithium polymer batter.

The N-Key rollover switches on the Blade 15 2022 is, sadly, identical to the one on its 14-inch sibling. That translates to the same short key travel, coupled with a sharp and very noticeable actuation. On the plus side, it doesn’t fatigue my fingers, even after prolonged hours of typing and gaming, but the top half of it does get near-searing hot if the latter scenario extends beyond a reasonable period of time. A point I am revisiting a little further down this section.

Then there’s the OLED display of the Blade 15 2022 which, as I mentioned before, is a real treat and an extra added bonus to the package. I like it compared to an IPS panel because colours on the screen pop out, as well as feel and look punchier, while blacks are definitely deeper and the whites on screen feel like someone lobbed a flashbang into the room. The latter is more apparent when all the lights are off. And one more, having a high refresh rate of 240Hz also helps to sweeten the pot, even if all my titles never manage to hit or exceed that number, in terms of frames.

That brings us to the gaming prowess of Blade 15 2022, and it’s an area that actually took me a little by surprise. Let’s set the record here: both the Core i7-12800H CPU and 100W RTX 3080 Ti discrete GPU are not slouches, not by any measure of the term. When push comes to shove, these two components have no issue looking within themselves to find the power needed to drive the framerates up and keep them there.

But in order to do that, Blade 15 2022 actually suffers from two issues, the first being a common and familiar enemy to the lineup: heat. Despite its vapour chamber cooling solution, the laptop’s heat generation actually ramps up something fierce and more specifically, it’s always the CPU that generates the most heat.

While gaming, the 12800H can easily ramp up to 100°C on average and stay there indefinitely, which in turn causes the top half of the laptop to reach near scorching levels of heat. Seriously, I’m not joking about the heat: even with the fans aggressively trying to keep heat back, touching certain keys located at the top can burn. In the case of the GPU, the RTX 3080 Ti barely even breaks a sweat while in operation, with the whole thing peaking at 77°C on average and even then, it’s the component that is doing most of the groundwork.

But that heat generation from the 12800H also leads to another issue, brought about by thermal throttling, and one I never thought I’d see in a modern laptop such as the Blade 15 2022: frame stuttering. Despite its ability to work with the onboard GPU to generate high frames, there are times when the overall animation and fluidity of all titles look and feel really choppy, making most games look as if they were poorly coded, even when they clearly aren’t.

Appalling endurance for a laptop with an 80WHr battery.

And to say nothing of the less-than-stellar endurance of the Blade 15 2022’s 80WHr battery. While I conducted this review with a sense of impartiality, a part of me was thought that the legs on this laptop’s battery would at the very least, be on par with those of the Blade 14 Ryzen models. But no, that unfortunately isn’t the case.

From being fully charged to single-digit battery life, the Blade 15 2022 is barely capable of lasting for four hours. Specifically, it starts crying for the charging adapter after just three hours and 30 minutes on average, with that longevity being consistent with the display’s refresh rate set at 60Hz and 240Hz, and with the brightness level maintained at 50% and Battery Saver mode turned on.

While the performance of the Blade 15 2022 in the charts speaks for itself across the board, I believe it important to address the missing benchmark figures of UL’s PCMark 10’s Extended benchmark. This particular test was unable to be completed, with the laptop consistently failing to make it past the first portion of the test. It is an odd situation, and I could not find any workaround to it and thus, have simply omitted that test from this list.

Beyond that, everything else seemed to work fine.

At RM19499, MSI’s current thin and light gaming laptop is certainly more expensive than the Blade 15 2022 but it’s also slightly above its weight. Internally, this portable gaming machine houses an Intel 12th Gen Core i9-12900H CPU, an NVIDIA GeForce RTX 3080 Ti 16GB GDDR6 running at 105W, 64GB DDR5-4800 RAM, and a massive 99.9WHr battery, which is the legal limit of any laptop to be allowed on board any flight.

Again, at that price, its display is a 15.6-inch IPS panel with a maximum resolution of 4K (3840 x 2160) and 120Hz refresh rate. As this is an MSI laptop, you can also expect it to feature the brand’s Cooler Boost Trinity+ thermal dissipation technology.

I find myself in a rare moment, where I stand at the crossroads with the Razer Blade 15 2022. On one hand, the laptop is, beyond a shadow of a doubt, powerful in its own right and can definitely serve as a desktop replacement, when and as needed by the user.

The Razer Blade 15 2022 is a powerhouse that is kneecapped by its own thermal and battery life issues.

However, the sad and unfortunate reality of the Blade 15 2022 is this: while it may be a fully functioning powerhouse, it is being hobbled and held back by a severe case of thermal throttling, to the extent that I am experiencing stutters in-game. Not only that, but there is also a weird lag when opening apps and programs that, frankly, only seems to manifest itself with Intel-powered laptops.

There is also the issue with the Blade 15 2022’s lacklustre battery life that, honestly speaking, is very disappointing. Given the legs on the battery of its most recent iteration of the Blade 14 Ryzen, as well as ASUS’ own ROG Zephyrus G14, and with an 80WHr battery to boot, there is no reason why Razer could not provide a repeat performance with this laptop.

So, with that, I will simply repeat what I said earlier. If you’re looking for a desktop replacement, then the Blade 15 2022 can be made a part of your consideration. If you’re on the hunt for something with battery longevity, though, you may wish to look elsewhere.

The post Razer Blade 15 2022 Review: Great For Gaming, Endurance Not So Much appeared first on Lowyat.NET.