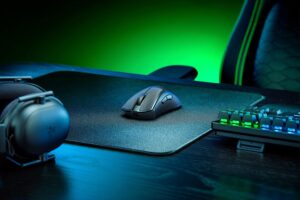 Razer has finally released a new product in its DeathAdder series, the DeathAdder V3 Pro. This is the first new mouse in the lineup since the V2 Pro was launched back in 2020 and it certainly comes with a lot of improvements, with the price increase to boot.

First of all, while it retains the right-handed ergonomic shape, the DeathAdder V3 Pro is now over 25% lighter than its predecessor, weighing in at just 63g for the black variant while the white one weighs 1g more. We can assume that one of the sacrifices that Razer had to make to achieve the lightweight form factor is by getting rid of the RGB lighting, which is usually a staple for the brand’s products.

The mouse is equipped with the flagship Focus Pro 30K optical sensor, which has a maximum DPI of 30,000. It also features third-generation Razer Optical Mouse Switches, which carry a 0.2ms response time and is rated for up to 90 million clicks. If for some reason, you want to use the mouse on a glass table, you now can as the mouse is compatible with glass surfaces as long as it is at least 2mm thick.

The DeathAdder V3 Pro is packed with five programmable buttons as well as a dedicated DPI button. Other features of the gaming peripheral include smart tracking, which automatically calibrates itself across different surfaces, and asymmetric cut-off, which lets you set the landing distance.

Gamers have the option of using it with the included USB-C cable or wirelessly using the HyperSpeed dongle, though it lacks Bluetooth support. On its own, the mouse offers a polling rate of 1000 Hz at 1ms polling intervals, but if you pair it with a HyperPolling dongle, it can support 4000 Hz at 0.25ms intervals.

The new DeathAdder mouse can last up to 90 hours before needing to be recharged. However, the battery life is significantly cut down to just 24 hours if it’s used together with the HyperPolling dongle.

The Razer DeathAdder V3 Pro is available now for a whopping RM749, a far cry from the V2 Pro’s RM579 price tag. The HyperPolling wireless dongle is also sold separately for RM149.