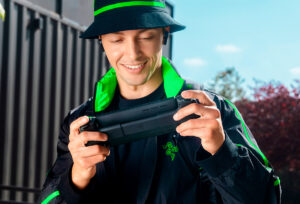 Back in September last year, Razer announced the self-named Razer Edge Cloud Gaming, a handheld gaming console explicitly designed as its name intends. Announced during the brand’s annual RazerCon, the only detail missing was its availability. Up until now, that is.

As a quick recap on its specs, the Razer Edge Cloud Gaming is a removable 6.8-inch tablet with an AMOLED Full HD+ display that runs Android 12, while the controller it is attached to is actually the Razer Kishi V2 Pro. Other specifications of the display include a 144Hz refresh rate and 288Hz touch sampling rate, while the panel itself is made from Gorilla Glass.

Underneath the hood, the Razer Edge Cloud Gaming is rocking a Qualcomm Snapdragon G3x Gen1 SoC, 8GB LPDDR5, and a 5000mAh. For storage, it comes with 128GB UFS 3.1 of internal storage, and can be expanded by up to 2TB via the integrated microSD external storage slot. On another note, the cloud gaming console also comes built with 2-way speakers and two microphones, the former supporting THX Spatial Audio. Oh, and there’s also a 5MP front-facing camera built-in at the front of the console.

For connectivity, the Razer Edge Cloud Gaming gets Wi-Fi 6E support, as well as Bluetooth 5.2 for wireless connectivity, along with a 3.5mm headphone jack and a USB-C, the latter in which all charging and physical file transfers will occur. The 5G model gets additional support for eSIM, as well as a Sub6 and mmWave antenna.

At the time of writing, we still do not have any word on local pricing or availability for the Razer Edge Cloud Gaming.

The post Razer Edge Cloud Gaming Handheld To Launch In The US On 26 January appeared first on Lowyat.NET.