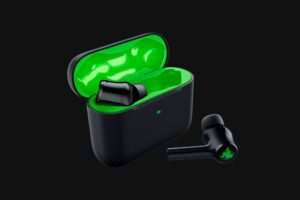 The RazerCon that happened over the weekend saw the official unveiling of the Edge cloud gaming device combo. During the event, the gaming peripheral maker also announced its new TWS buds, the Razer Hammerhead HyperSpeed. Unlike its previous iterations, these buds cater more to console gamers than those in the mobile space.

The HyperSpeed part of the new Razer Hammerhead TWS buds may sound familiar. If so, this is the HyperSpeed Wireless tech is something that is featured heavily in the brand’s recent releases. But to reiterate, this is the company’s tech to reduce the inherent latency in wireless audio products. And to use this, you’ll need a special dongle, which comes with a UBS-C connector. If you prefer, there’s good old Bluetooth 5.2.

In marketing this product, Razer has given the Hammerhead HyperSpeed two colourways, which it refers to as for Xbox and PlayStation. For the latter model, it adopts the PS5 colourway of white and blue, with the PlayStation logo on the charging case to complete the set.

Despite the “for Xbox” name, this model comes in the company’s own signature colour, which is black and green. Which, sure, overlaps with the primary colours associated with the Microsoft console. But the absence of an Xbox logo on the charging case makes it look like a regular Razer product, rather than a console tie-in.

All that being said though, the Xbox model is the default model not just because it doesn’t come with the console logo. Instead, it is the superior model because it can work with both Xbox and PlayStation consoles. At least, that’s what Will Powers, the PR lead at Razer, told The Verge.

Explaining this disparity, the report notes that Xbox consoles require a special security chip in the TWS buds’ audio transmitter for them to work. This chip makes the default version of the Razer Hammerhead HyperSpeed able to connect to both consoles. The white PS edition buds, though, can’t connect to the console that’s not officially available here.

Locally, unless you’re among those that have decided to import an Xbox console, this wouldn’t matter. For what it’s worth, the lacking of said special chip makes it so that the PlayStation edition of the Razer Hammerhead HyperSpeed doesn’t come with a fancy paint premium. Both can be found on the official Razer online store with a RM749 price tag. But at the time of writing, both are also listed as being out of stock.