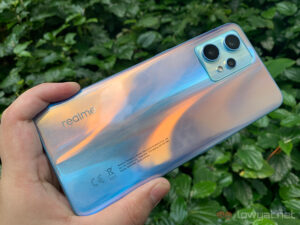 realme will soon be releasing its latest self-named 9 Pro+ 5G series in Malaysia next week, with the phone slated to be the first of several models in the lineup to arrive in our market. The phone is definitely eye-catching as it implements the same light shift technology that we’ve seen with the Vivo V23, which isn’t surprising given that they’re both under the same parent company.

The smartphone has a 90Hz Full HD+ 6.4-inch Super AMOLED display protected by Gorilla Glass 5. To unlock it, the realme 9 Pro+ 5G sports an under-display fingerprint scanner that also doubles as a heart rate monitor, which in my opinion is placed way too low.

The 9 Pro+ comes in three different colour options but the colour-shifting feature is only available on the Sunrise Blue variant, which is the one we got for our hands on. In general, the plastic back with curved sides feels good in my hand, and the rubbery grip-like texture is a plus point.

To complement its already extreme glossiness, the back is also peppered with glitter. But where the phone truly shines is when it’s exposed to direct sunlight or UV light, where it will temporarily change from blue to a reddish-orange hue. realme says this is inspired by the sunrise, hence the name of this particular colourway.

A fun discovery I made is that the phone is so reflective, you can literally project the entire back of the phone onto a flat surface when you expose it under a bright light source and angle it properly – including the camera rings.

Speaking of cameras, the realme 9 Pro+ is equipped with a triple-camera setup consisting of a 50MP main shooter,  8MP ultrawide, and a 2MP macro. On the front, you’ll find a 16MP punch-hole selfie camera on the top left corner, which I think is a better placement rather than putting it in the middle.

The rear camera island’s bump is already quite significant, but none of the three lenses sits flush with the module, thus increasing the bump height and leaving them exposed. As such, the housing will cause the phone to wobble when you place it on a table.

The volume rocker and the dual SIM card slot are on the left side, with a 3.5mm headphone jack at the bottom, but there’s no microSD expansion slot onboard. It also has stereo speakers that support Dolby Atmos, which are considerably loud.

Under the hood, it’s powered by a MediaTek Dimensity 920 chipset and has 8GB of RAM with 128GB of storage. It’s also capable of RAM expansion, which gives you the option of using up to 5GB of your storage capacity as RAM.

The phone seems to be quite interesting so far, but the local pricing has not been revealed yet. It is set to launch on 2 March, so you can look forward to an in-depth review of the realme 9 Pro+ 5G soon.