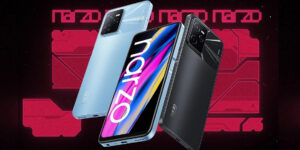 After Apple set the precedent by removing the charging brick from the box of new phones, Samsung followed suit with its flagships and more recently, even with its mid-rangers. Now it seems that realme is following the footsteps of the tech giants, at least with its upcoming budget phone.

In a recent post on the realme community forums, the company announced that it won’t be including a charger with the Narzo 50A Prime. It explained that it’s part of its new sustainability initiative to achieve net-zero carbon emissions by 2025.

The company also justified the move by saying that with the charging brick excluded from the box, it somehow gave realme enough margin to give the next Narzo significant upgrades in chipset performance and “screen revolution” for the best price.

While you’ll have to buy a charger separately for this phone, the company clarified that other realme phones will continue to offer the charging brick in the box. The company’s CEO once told XDA in an interview that a phone’s charging speed might be a factor in removing the charger from the box, so this might mean that the Narzo 50A Prime won’t support ultra-fast charging.