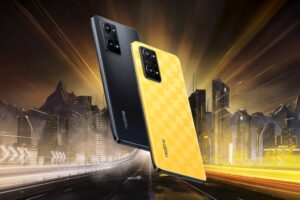 realme had just announced the GT Neo 3 back in June of this year. But the company already has a followup device, in the form of the realme GT Neo 3T. The device is also now available in Malaysia for purchase for anyone who is interested.

The realme GT Neo 3T is equipped with a 6.62-inch AMOLED Full HD+ display with a 120 Hz refresh rate and a 1000Hz touch sampling rate. On the inside, it sports Qualcomm Snapdragon 870 chipset, 8GB of RAM and 128GB of storage space, and a 5000mAh battery which supports 80W charging. The company claims that a 12-minute charge can give the battery up to 50% of its charge.

For its cameras, the realme GT Neo 3T sports a triple-camera setup consisting of a 64MP main, an 8MP wide-angle and a 2MP macro shooter. In front, is has a 16MP camera sitting in the top left corner of the screen in a punch hole cutout.

Specs wise, the realme GT Neo 3T is pretty similar to the preceding model. No real surprise, considering the fact that there is only two months between them. In fact, the only two notable changes here can be found in the chipset and the main camera. The GT Neo 3 was powered by a MediaTek Dimensity 8100, with a 50MP main camera instead.

For its retail price, the realme GT Neo 3T can be purchased for RM1799. But as part of a limited time promo, you can get it for RM200 less. This only lasts until 25 August, though. And if you’re among the first 200 to make your purchase, you’ll also get a realme Watch 3 thrown in for free. You can hit the links below to find out more about the phone, or even to bite the bullet and get one for yourself.