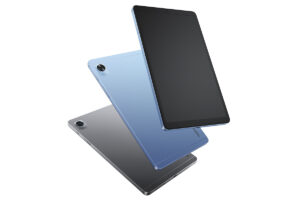 realme has confirmed that its compact-sized tablet, the realme Pad Mini, will also be launching alongside the realme 9 mid-range smartphone in Malaysia next week. The new device, as implied by its name, is a smaller variant of the brand’s first ever tablet product that was released locally last year, but with completely different internal hardware.

The realme Pad Mini sports a 8.7-inch IPS LCD display, featuring a resolution of 1340 x 800 pixels and a 5MP front facing camera housed in its upper bezel. It also comes with Bluetooth 5.0 connectivity, a USB-C port, Android 11 out of the box, stereo speakers, and a 3.5mm headphone jack. There’s no under-display or side-mounted fingerprint sensors, so user authentication is solely dependent on the tablet’s biometric facial scanner feature.

Unlike the base model, the new tablet features a Unisoc Tiger T616 chipset instead of a MediaTek Helio G80. Paired alongside it is up to 4GB of RAM and up to 64GB of UFS 2.1 internal storage, which can be expanded further via microSD.

Powering the new tablet is a 6,400 mAh battery which comes with 18W fast charging support, as well as reverse charging capability. Meanwhile, found on its back is a lone 8MP f/2.0 camera that is capable of recording 1080p at 30 fps.

As mentioned earlier, the realme Pad Mini will debut in Malaysia alongside the upcoming realme 9 smartphone next week on 20 April 2022. For your reference, pricing for the tablet starts at PHP 9,990 (~RM 810) when it launched in the Philippines last week.