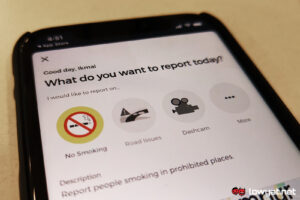 The Selangor Bebas Asap Rokok (Selbar) campaign has signed a Memorandum of Understanding with the RepotLah app to allow users to report those smoking cigarettes in prohibited areas. The app allows for anonymous snitching on any errant smokers you see, which will be sent to health enforcement officials.

With the collaboration, RepotLah has added a new no-smoking module in its app for reporting that includes the location, the name of the premises, and other relevant information in one form. “This will allow for better and swift enforcement action to be taken, instead of having volunteers and health officials go back and forth to get the necessary information,” said IKRAM Health Malaysia, which runs the Selbar campaign.

If you recall, the government implemented a total smoking ban from all eateries and restaurants nationwide on 1 January 2019 under the Control of Tobacco Products Regulation 2004. Those caught smoking in prohibited public areas could be fined up to RM10,000 or face two years of jail time while eateries found to have allowed customers to smoke cigarettes would be slapped with a maximum fine of RM2,500.

From January to October of last year, 3,419 notices were issued to premises and customers who did not comply with the rule, with the Ministry of Health conducting checks on premises regularly. Those who want to file reports directly to the ministry can do so by calling them at 03-88924530 or contacting their WhatsApp hotline at 010-8608949.

According to RepotLah’s FAQ, the app has a dedicated team to sift through fake and authentic reports and while users are required to register with their phone number, they can still submit information anonymously if they wish to. The location of a report will be automatically tagged but in case it is the wrong location, you can manually enter the location before submitting it.

Aside from the errant smokers, Repotlah also allows you to report things such as potholes, malfunctioning traffic lights, illegal waste disposal, and as well as allowing you to upload dashcam footage of road offences like reckless driving and hit and runs. The app can be downloaded through the Apple App Store and the Google Play Store.

The post RepotLah Now Lets You Snitch On Smokers In Restaurants appeared first on Lowyat.NET.