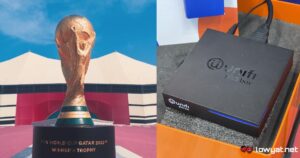 Radio Televisyen Malaysia (RTM) recently announced that it will broadcast 41 matches from the FIFA World Cup 2022 that will be taking place in Qatar starting from 20 November. With a cost of RM 32.5 million, the national public broadcaster plans to show these matches via three TV channels and the RTMKlik online streaming platform.

Given that unifi TV has one of RTM’s World Cup channels which is TV2, does this mean unifi TV subscribers are able to catch the tournament through the service? Well, the answer is unclear at the moment.

Facebook user has recently messaged unifi’s Facebook page to ask regarding the World Cup broadcast on unifi TV and this was the reply that he received:

A few days after we received the screenshot above, we reached out to TM to obtain further clarification. However, the company’s representative responded back and noted that they have nothing official to announce at the moment.

The response was rather unusual when compared to previous iterations of the FIFA World Cup in 2018 and 2014. During those times, it didn’t take long for TM to reveal that they were not able to obtain the clearance to show RTM’s World Cup broadcast.

It is worth noting that in 2014 TM tried to negotiate with Astro who apparently holds the World Cup broadcast rights even for free-to-air channels but it ended up in disappointment after the fee requested by the satellite TV company was deemed too high.

TM then subsequently provided unifi TV customers with complementary content to keep them occupied during the World Cup 2014 season although the RTM channels would be blacked out during World Cup broadcast. For the 2018 edition, the channels would show alternative contents that came directly from RTM instead.

So, it remains to be seen whether this will happen again this year. We will keep you updated once we hear more from TM, so stay tuned.