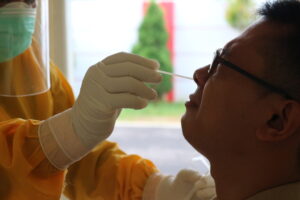 China’s decision to finally open up its borders on 8 January amidst a surging wave of COVID-19 cases in the country has sent many nations into a panic with some implementing stringent procedures specifically for travellers from the country. While Malaysia’s federal government has not enforced such rules as of yet, the Sabah state government may implement them depending on the outcome of its Cabinet meeting this week.

Last week, Sabah COVID-19 spokesman Masidi Manjun who is also the MP of Karanaan and the state’s Second Minister of Finance as well as its Housing and Local Government Minister announced that individuals from China are required to show a negative test result taken within 48 hours before being allowed to enter the state, effective 1 January 2023. He said that the move was in anticipation of an influx of tourists from China following the country’s ban-lift on its citizens travelling abroad, three years after the pandemic began.

However, the decision was then postponed shortly afterwards, with Masidi explaining that they will only determine whether to implement the pre-departure test policy after getting a briefing from the state’s Health Department. The spokesman stated that the Sabah Cabinet would meet up this Wednesday to discuss and set the latest COVID-19 policies for the state.

There are currently no direct flights between mainland China and Sabah, with no commercial airline announcing the resumption of the route so far, but Malaysia Airlines did restart a connection between Taiwan and Kota Kinabalu last month. While it’s uncertain whether the state will fully backtrack on the policy, the Sabah Association of Tour and Travel Agents has voiced its support to allow visitors from China with the precaution of pre-departure tests.

In response to China’s border opening, Health Minister Dr Zaliha Mustafa announced last Friday that the country’s international entry points will start to impose a fever screening on all international arrivals. The Ministry of Health has also begun conducting tests on sewage samples from planes coming from China to track possible new variants of COVID-19 while the Director-General of Health Dr Noor Hisham Abdullah has said that two main COVID-19 variants in China, the BA.5.2 and BF.7 have been detected in Malaysia.

The post Sabah Mulls Over Mandatory COVID-19 Testing For Visitors From China appeared first on Lowyat.NET.