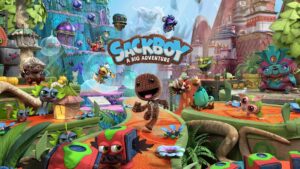 Sackboy: A Big Adventure was a PS5 launch title featuring what is the de facto new PlayStation mascot. It was also available for the PS4, but soon, nearly two years after its initial release, it will be available on PC as well.

Sony Interactive Entertainment made the announcement on the PlayStation Blog. Alongside the jump to PC, Sackboy: A Big Adventure will also come with some graphical upgrades, if your rig can handle it. On the list is 4K resolution and 120FPS, support for Nvidia DLSS2, and variable refresh rates. And as should be the norm for PC ports, there’s also widescreen support, including 21:9.

Alongside the graphical features, SIE also posted the recommended PC specs for Sackboy: A Big Adventure. Which is pretty intense, considering it wants an Nvidia GeForce GTX 1070 or AMD Radeon RX 5600 for 1080p at  60fps. And considering the kind of hardware needed for 4K 60fps, one can only wonder what you would need to run the game at 4K 120fps. Also interesting to see is that, for nearly all performance tiers, an SSD is listed as a requirement, with a pretty substantial 60GB of storage space being taken up as well.

Being a PS5 launch title, you can expect Sackboy: A Big Adventure to also make full use of the DualSense controller, including haptic feedback and dynamic trigger effects. Though the blog post notes that you’ll have to use a wired connection for the DualSense for these to work. You can also stick with the good old mouse and keyboard combo if you prefer.

Sackboy: A Big Adventure will be available on PC starting 27 October 2022, on both Steam and the Epic Games Store. On both, the game is currently being listed with a price tag of RM249.

The post Sackboy: A Big Adventure Comes To PC On 27 October appeared first on Lowyat.NET.