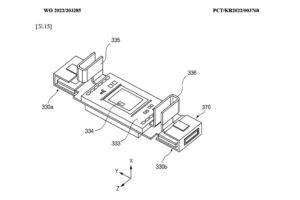 In the world of cameras, the idea of moving the image sensor itself to compensate for handshakes, or in-body image stabilistation (IBIS) is far from new. But it made the transition to phones only two years ago with with the iPhone 12 Pro Max, with the fruit company calling it the sensor shift tech. Samsung may be working on its own version of the tech, as it has been granted a patent that describes basically that.

SlashGear reports that the South Korean tech giant has filed the patent with the World Intellectual Property Organisation (WIPO). The abstract of the document describes basically sensor shift tech by Apple, just in much more technical terms. The full text is in Korean, but running it through Google Translate and we see basically the same thing, only longer.

As is the case with patents, this filing is not a sign that Samsung phones in the future will sport this image stabilisation tech. That being said, its main competitor in the smartphone space is already in its second generation of sensor shift tech, with three generations of devices using it. With that in mind, the South Korean tech giant may be aiming to have its own version be implemented in its own phones sooner rather than later.

The report also notes that there are rumours of next year’s Samsung flagship devices, the Galaxy S23 family, sporting the company’s own take of the sensor shift image stabilisation tech. Prior rumours also claim that the non-Ultra models may also be recycling this year’s models’ telephoto lens. Despite the designs of seemingly the entire lineup having been leaked, it’s not exactly easy to tell if these camera-related rumours are on the mark or not. It’s not impossible for the company to completely rearrange the phones’ innards while still keeping the exterior looking familiar.

The post Samsung Files Patent For Its Own Sensor Shifting Tech appeared first on Lowyat.NET.