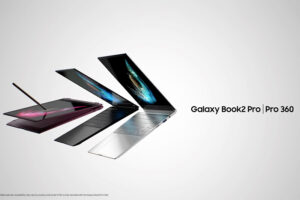 Samsung has unveiled a new laptop series with two models, the Galaxy Book2 Pro and the Galaxy Book2 Pro 360 — each comes in 13.3-inch and 15.6-inch sizes. All laptops from the newly introduced line sport a 1080p 16:9 AMOLED display, are Intel Evo certified, and claim a battery life of up to an impressive 21 hours.

First up, the Galaxy Book2 Pro is powered by the latest 12th Gen Intel Core processors, which can be configured with either the Core i5 or Core i7. Both the 13.3-inch and 15.6-inch models come with Intel Iris Xe graphics, but the latter has an optional upgrade to the new Intel Arc dedicated mobile GPU.

Onboard, the laptop is equipped with a single Thunderbolt 4 port, a single USB Type-C port, one USB 3.2 port, an HDMI port, a 3.5mm headphone jack, and a microSD card slot. It comes with between 8GB to 32GB of LPDDR5 RAM and up to 1TB of storage.

As you might have guessed from its name, the Galaxy Book2 Pro 360 is a 2-in-1 convertible with a touchscreen and S-Pen support, though this stylus doesn’t have Bluetooth. Just like its clamshell sibling, it runs on the latest mobile Intel chipset with Intel Iris Xe graphics.

The convertible laptop sports one Thunderbolt 4 port, two USB Type-C ports, a 3.5mm headphone jack, and a microSD card slot. Just as with the regular Book2 Pro, it can be configured with up to 32GB of RAM and max out at 1TB of SSD storage.

All models come with support for Wi-Fi 6E and Bluetooth 5.1, but the larger Book2 Pro is the only one in the entire lineup that has an option for 5G with a nano SIM slot. Each laptop also has a 1080P webcam, stereo speakers with Dolby Atmos, 65W chargers, and a fingerprint scanner that doubles as a power button.