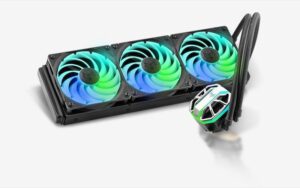 Sapphire is a popular brand among gamers, typically known for custom-cooling AMD’s Radeon graphics exclusively. So, when the company announced its new AIO CPU coolers, it was a little bit surprising.

The new AIO cooler series is part of Sapphire’s Nitro+ series and comprises of two models, the S360-A and S240-A. As their names suggest, the AIO coolers come in radiator sizes of 360mm and 240mm, while cooling is conducted via the included Nitro+ Hybrid Fan Blade that Sapphire says have improved downward air pressure. While also keeping the decibels generated by the fans low.

In keeping with the times, both the S360-A and S240-A have ARGB that is controllable and customisable via Sapphire’s own software. Likewise, ARGB access also extends to the CPU pump which, by the way, is based on Asetek’s 7th generation pump technology that supposedly delivers up to 15% better thermal performance.

Oh, and the AIO cooler also features Out-Of-Bounds temperature sensing technology: a feature that continuously monitors the internal liquid’s temperature and automatically boosts pump speed when necessary to keep the temperature low or at optimal levels.

In terms of CPU support, the Sapphire Nitro+ S360-A and S240-A coolers supports the AM4 socket for AMD Ryzen CPUs, as well as LGA115X, LGA1200, LGA20XX, and LGA1700 sockets for Intel CPUs. The AIO coolers are already being shipped and will be available on the shelves of Sapphire retail partners.