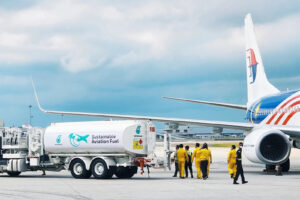 The Sarawak state government has announced plans to focus on sustainable air travel and decarbonising the aviation industry through the production of greener aviation fuels such as Sustainable Aviation Fuel (SAF). To achieve its ambition, the state is collaborating with Airbus and Rolls Royce through the Aerospace Malaysia Innovation Centre (AMIC).

The collaboration will be involving research and development into green hydrogen, fuel cells, e-methanol, and biofuel as future aviation fuel for the industry to reach net-zero carbon emission goals. Sarawak Premier Abang Johari Openg said there is a need to address the price gap between jet fuel and SAF for the latter to be more competitive. Coincidentally, national carrier Malaysia Airlines recently flew its first flight running on a blend of conventional jet fuel and SAF by Neste from Kuala Lumpur to Singapore.

Abang Johari said that Sarawak has been identified as a potential region for Carbon Capture, Utilisation, and Storage (CCUS) and encouraged South Korean companies to work with the state to deploy CCUS. Carbon capture is the process of capturing carbon dioxide before it enters the atmosphere, compressing it, and then storing it.

The state has long been an advocate for low-carbon alternative fuel, with Sarawak Energy launching Southeast Asia’s first integrated Hydrogen production plant and refuelling station in Kuching back in 2019. The city also introduced a free hydrogen-powered bus service by Sarawak Metro while the state’s petroleum brand, Petros, is also planning to offer EV charging and hydrogen refuelling at its petrol stations throughout Sarawak.

Sarawak Metro will also be implementing a trackless autonomous rapid transit (ART) public transport system that will be powered by hydrogen fuel cells to ramp up the state’s hydrogen industry. Construction of the train in Kuching is slated to begin by the end of this year while another system is planned for Bintulu in 2025.