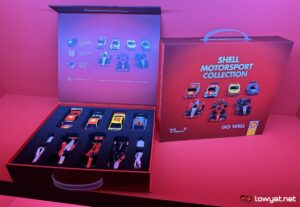 Shell Malaysia has kicked off the Shell Motorsport Remote Control Collection roadshow yesterday at KL Sentral and during our visit yesterday, we learned that visitors can purchase any of the seven cars in the collection including the unreleased models. However, this was no longer the case when we went to the roadshow this morning.

As the story goes, we came to the roadshow in order to obtain the Hyundai i20 Coupe WRC which was out of stock as noted in our report yesterday. According to the rollout schedule, this particular vehicle is scheduled for release on 22 October.

According to some of the staff that we briefly chatted with at the venue, the changes in the sale policy were meant to direct more attention to Shell stations themselves. In a way, they are hoping that customers would consider visiting their neighbourhood Shell stations on weekly basis instead of aiming for the unreleased models or full collection at the roadshow.

While that is indeed a sound reason, it is still a baffling decision though as we were told yesterday that there is an extremely limited number of vehicles being made available each day. Furthermore, the two roadshows are taking place in Kuala Lumpur.

Given the vast amount of Shell stations across the country, having an early release at the roadshow hardly seems like a detracting factor at all. But then again, it is also possible that Shell Malaysia may have overlooked the original policy to sell the unreleased models.

With that, visitors to the roadshow in KL Sentral are only able to purchase Week 1 and Week 2 vehicles which are the BMW M4 Motorsport and Nissan Formula E Gen 2. They can also opt for the Ferrari SF90 F1 model which can be obtained by purchasing selected Shell Helix 4L engine oil.

The Bluetooth Smart Battery module is also available at the roadshow. However, we were told that stocks for the battery are extremely limited which is something we heard happening throughout Shell stations too.

In the case of the Hyundai i20 Coupe WRC that we intend to purchase earlier, we were told to come back to KL Sentral’s roadshow on 22 October to get it. As noted yesterday, Shell Malaysia will also bring the Shell Motorsport RC Collection roadshow to Mid Valley Megamall KL from 26 to 30 October.

Meanwhile, we have since reached out to Shell Malaysia’s representative for further clarifications but didn’t receive any response by the time this article is published. We will update this story if we received further communications from the energy company.