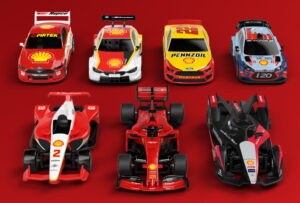 Over the years, Shell has released quite a number of miniature models into the market such as this Shell V-Power LEGO Collection back in 2015. This year, it looks like the energy company is upping the ante with the new Shell Motorsport Bluetooth Remote Control Collection.

As you may have guessed from the name, the upcoming collection by Shell is far different from its previous releases which usually come with a pullback motor. Developed in collaboration with Brandbase, you can actually control these vehicles by using Bluetooth and the Shell Racing app on Android or iOS devices.

Just like previous Shell collections, these vehicles will not be released all at once. According to reports by Paul Tan and Careta, only one model will be released per week starting from 8 October until 8 December with the exception of the Ferrari SF90.

Each of these racing machines is priced at RM30 although you have to pump in fuel worth at least RM50 in order to be eligible to purchase them. If you want to enable their remote control capability, you have to purchase their Bluetooth Smart Battery module which is available separately for RM30.

How about the Ferrari SF90 that we mentioned earlier? The F1 model can only be obtained by purchasing the Shell Helix 4L lubricant although it will be provided without any extra costs and comes equipped with the Bluetooth Smart Battery module.

Shell is also releasing a special box for the collection which will be available for RM80. That being said, you need to purchase at least RM80 of the Shell V-Power Racing fuel before you can get your hands on the box.

While Shell Malaysia itself has yet to make any official announcement on its social media or official website regarding the new collection at the time this article is published, both Paul Tan and Careta have noted that the collection will be on display at KL Sentral from 17 to 23 October as well as at Mid Valley Megamall on 26 to 30 October. Shell will also bring in a life-size replica of the Hyundai i20 WRC machine to both locations too.