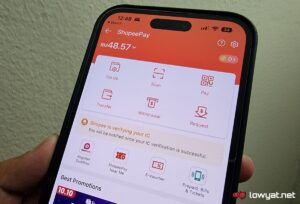 Launched in mid-2019, ShopeePay was originally introduced to enable consumers to instantly pay for their purchases on Shopee, especially during popular midnight sale promotions. The e-wallet’s reach has since been expanded further to cover physical stores and it has also been chosen as one of the official e-wallets for the ePemula program earlier this year.

Aside from payments, another well-known ShopeePay feature is the ability to withdraw the wallet’s balance directly to one’s bank account. Available only to ShopeePay Premium accounts which users can obtain by verifying their MyKad, the withdrawal process does not happen instantly though as it takes around one to three working days for the transfer to be completed.

Nevertheless, if you are one of those that love this feature, we have bad news for you then: the e-commerce outfit will be removing the option from ShopeePay later this month.

According to Shopee Malaysia’s Help Centre, ShopeePay’s withdrawal feature will disappear from its app on 14 October 2022. Hence, you generally have around eight days from now to move funds from your ShopeePay wallet to your bank account.

Interesting enough, Shopee Malaysia is removing the feature due to security concerns. Specifically, the company noted in the FAQ that this move is meant to reduce the risks of money being transferred to unauthorized accounts.

While we have no knowledge if ShopeePay has encountered any incidents of such nature, unauthorized fund transfers have indeed become a hot topic among consumers recently. This is to the extent that Bank Negara Malaysia has asked local banks to step up their security measures as soon as possible.

However, the removal of the withdrawal option does not mean ShopeePay has completely lost its ability to transfer money though. There is still the DuitNow Transfer option that allows users to transfer funds from their ShopeePay wallet to other Malaysian banks and e-wallets that have joined the DuitNow ecosystem.