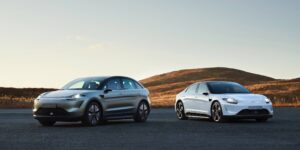 Sony previously revealed its plan to partner with automaker and fellow Japanese company Honda to develop electric vehicles, with the aim of marketing their first vehicles in 2025. The joint venture itself is planned to be formed by the end of the year, though it has been revealed that this soon-to-be established entity would be an independent business rather than a direct representation of either companies.

In an interview with Nikkei, Sony president and CEO Kenichiro Yoshida states that both the company and Honda shared the view that their upcoming EV joint venture would benefit more in the long run being an independent business. While no further details were provided, he did mention that there is a possibility that companies may sell a stake in the venture or have an initial public offering.

In regards to the venture’s overall scope and business model, Yoshida says he and the partners are still in discussion at this time. “I hope to be able to talk a little about it at some point in the near future,” he added.

To recap, both Sony and Honda announced the EV joint venture back in March. The Japanese tech giant revealed that it will contribute with its expertise in technologies including image sensors, telecommunications and entertainment, whereas Honda will focus on the automotive manufacturing and marketing aspects. Meanwhile, the upcoming company will handle vehicle designs, development and sales.

Prior to that, Sony previously unveiled two of its EV prototypes, the Vision-S sedan and the Vision-S 02 SUV. It is still unclear for now whether the joint venture will base its 2025 EVs on the two models or something completely new altogether.

The CEO also acknowledges the likeliness of seeing potential competition with tech rival Apple, who have been rumoured to enter the EV scene with its own in-house car for a while now. More interestingly, Yoshida also adds that there may be areas where the two companies could collaborate instead.

The post Sony And Honda Wants Their EV Joint Venture To Be An Independent Business appeared first on Lowyat.NET.