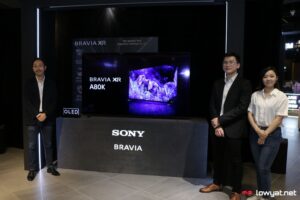 Sony today officially announced its latest 2022 BRAVIA XR lineup in Malaysia. Leading the charge at the launch is the A80K, which happens to be one of two other models that are also available starting today.

Specs-wise, the A80K is a 4K OLED TV that is available in three models: 77-inches, 65-inches, and 55-inches. As for what is packed inside this model, the A80K is equipped with a Cognitive Proecessor XR chipset, which Sony will adjust the picture and audio to a level in which humans hear and see pictures and sound. Providing a “revolutionary experience” that enhances the immersion experience.

As with all OLED TVs, one of the display’s biggest draw is the truer-to-life contrast ratio. The A80K and its OLED panel is no exception to that rule, and for that matter, it also comes with Sony’s proprietary XR OLED Contrast Pro technology, providing a higher peak brightness, brighter lumens, and deeper blacks in pictures and videos.

Another Sony-centric feature that makes a comeback is the Acoustic Surface Audio+. To put it simply, the back of the A80K’s screen is fitted with three actuators and two subwoofers. When paired with the appropriate sound system, the actuators and subwoofers can act as a front-facing speaker, with two of the actuators dedicated to treble performance and strengthening sound localisation.

And before you ask: yes, the A80K is a Google Smart TV, so there is access to Google Assistant. Further, you can access the digital assistant via the bundled remote control, which Sony also says it has improved and made easier to clean.

The Sony BRAVIA XR A80K is already available in Malaysia and retails at a starting price of RM9599 for the 55-inch, RM13899 for the 65-inch, and RM24999 for the 75-inch. We should point out that the 75-inch model isn’t currently being listed on the official Sony Store, but the brand did assure us that all three SKUs are already available.

Besides the TV, Sony also announced its BRAVIA Cam and BRAVIA Core. Starting with the BRAVIA Cam, the optional TV camera essentially adds the ability to use gesture controls and video chat in the living room.

BRAVIA Core, on the other hand, is Sony’s own streaming service and can best be described as the brand’s own “Netflix” option for consumers. It comes preloaded with the A80K and other 2022 BRAVIA XR TVs. Upon purchasing any of the new TVs, consumers will be able to redeem up to five current release or catalogue feature films, while also getting up to 24 months worth of unlimited streaming of shows.