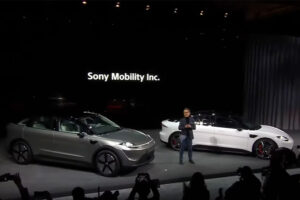 Sony brought out its VISION-S concept car from a couple of years ago again during its CES 2022 keynote address. But this time around, it also introduced a a new SUV prototype, showcasing the company’s pivot into the electric vehicle market.

The SUV, known as the VISION-S 02, puts Sony’s EV concept into a larger seven-seater form factor, but with even more sensors than its sedan counterpart. While the earlier prototype sported 33 sensors, this particular model houses a whopping total of 40 sensors inside and out for safety monitoring.

Featured onboard the vehicle are CMOS image and LiDAR sensors for its Level 2+ driver assistance system. It also has Time-of-Flight (ToF) sensors for driver authentication and to enable gesture controls.

The SUV also has a deep emphasis on entertainment, as it is equipped with “360” surround sound speakers. Besides that, there’s a huge panoramic screen adorns the dashboard, while each of the rear seats has its own display – all of which are capable of video playback and streaming games via Sony’s PlayStation Now service.

While both of the VISION-S vehicles are still just prototypes, Sony seems to be serious about competing in the EV industry. The Japanese conglomerate plans to establish a new subsidiary called Sony Mobility this spring, which will explore its entry into the EV market.

It has been testing the electric sedan in Europe since December 2020, but there’s no indication that Sony will be putting its cars into mass production any time soon. Meanwhile, rival tech giants Apple and Huawei are in the midst of developing their own cars, with a focus on full autonomy.