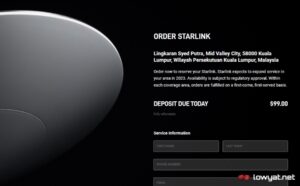 SpaceX today revealed that its satellite broadband service Starlink can now be obtained in 32 countries. Most of these countries are located in North America and Europe alongside Brazil, Chile, New Zealand and half of Australia.

How about Malaysia then? Interesting enough, our country together with many other countries throughout the world has been put under the “Coming Soon” category.

Things then get even more interesting as the “Starting in 2023” label will appear when you hover your mouse cursor over Malaysia on Starlink’s coverage map, as shown above. The pre-order form also noted that Starlink is expecting to expand its service into our market in 2023.

Should you be excited? Well, you may want to manage your expectations.

In case you missed it, the form above also noted that the availability of Starlink in the market still depends on approvals from the authorities. Furthermore, the same form has previously stated in February 2021, as shown below, that Starlink has aimed to bring the service here in 2022 and that clearly will not happen.

At that time, we tried to obtain further clarification from SpaceX regarding Starlink’s rollout in Malaysia. We have also reached out to the Malaysian Communications and Multimedia Commission and asked whether Elon Musk’s company have applied for regulatory approvals from it but in the end, both entities did not respond to our inquiries.

Even if SpaceX does make Starlink available in Malaysia, it is going to be rather costly. In the United States, the Starlink kit alone already costs USD599 (~RM2,634) and there is also a subscription fee of USD110 (~RM484) per month.