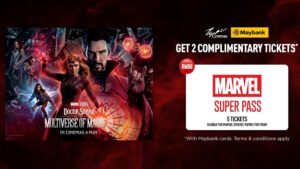 The Marvel Cinematic Universe is currently in its fourth phase, and it’s certainly going strong, to say the least. Local cinema chain TGV is looking to capitalise on this with the announcement of its Marvel Super Pass. The announcement is made in partnership with Disney, as well as Maybank.

What is this Marvel Super Pass? To put it simply, it’s an e-card which holds five movie tickets. The idea is that you can redeem these tickets when you watch Marvel movies at the cinema. More specifically, you can redeem the tickets when you go watch Doctor Strange In The Multiverse of Madness, Thor: Love & Thunder and Black Panther: Wakanda Forever.

Each pass is inclusive of FIVE (5) movie tickets. Enjoy MORE with extra TWO (2) complimentary tickets when you purchase with Maybank cards! pic.twitter.com/uirW3q3Ysj

With Maybank being involved in this partnership, you can expect the bank’s cutomers to be getting an additional perk. If you’re a Maybank Cardmember, you’ll get two extra tickets in the Super Pass. But the film restrictions still apply to those two extra tickets.

The Marvel Super Pass can only be bought via the TGV Eshop, which is linked below. It is available starting today for the price of RM90, which breaks down to about RM18 per ticket. If you’re eligible for the two extra tickets, then it comes down to just under RM13 per ticket.