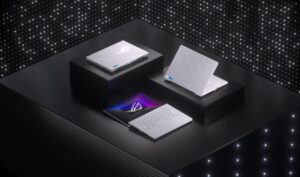 When ASUS introduced the ROG Zephyrus G14 back in 2020, it took the world of laptop gaming by storm with the power it offered in a 14-inch form factor and even kicked off a trend that saw the likes of Razer’s Blade 14 Ryzen emerge. This year at CES 2023, the Taiwanese brand upped the ante with its new G14, along with a return to form with NVIDIA.

For this year’s G14 2023 model, this laptop comes with all the top-tier components money can buy. As with all models in the series, this one has an AMD Ryzen CPU and more specifically, the 8-cores, 16-threads Ryzen 9 7940HS that was revealed at its CES 2023 keynote. The chipmaker’s naming convention for its new mobile processors series is convoluted, to say the least, and could ultimately generate some confusion in the future, but that’s banter for another article.

But the biggest surprise of all for the G14 2023 is the choice of discrete GPU: NVIDIA’s GeForce RTX 4090 Laptop GPU. Once again, the choice of GPU is another feather in ASUS’ cap and as Jen-Hsun Huang, NVIDIA’s CEO, even described the implementation as nothing short of “obscene”.

Why is this a big deal, you ask? Because since the inception of the G14, the 14-inch laptop has consistently been fitted either with an entry-level of mid-range GPU; from an RTX 2060 to an RTX 3050, followed by what was effectively a tryst with a Radeon RX 6800S mobile GPU to be part of the AMD Advantage program, the fact that the G14 2023 is capable of housing the top-tier RTX 4090 mobile is, for lack of a better word, a game changer.

Specs-wise, the RTX 4090 within the G14 2023 is based on NVIDIA’s current 4nm Ada Lovelace architecture, 16GGB GDDR6 graphics memory, has a boost clock of 1455MHz by default and a ROG Boost of 1505MHz. More importantly, it has a TGP of 125W but during a session with one of NVIDIA’s representatives here, I was informed that the GPU could operate at 85W and lose only just 10% of its total power. While that sounds like a stiff hit to performance, it is still, nevertheless, still capable of drive gaming at 4K resolutions.

At the time of writing, there is still no word on pricing but ASUS says that this laptop should be available to the masses sometime within the second quarter of 2023.