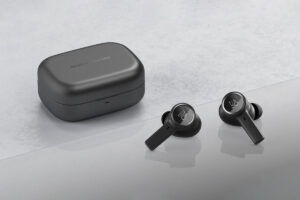 Bang & Olufsen (B&O) have recently unveiled its latest high-end TWS earbuds, the Beoplay EX. Being a successor to last year’s EQ model, you can expect it to also feature active noise cancelling (ANC), as well as a slew of other features and improvements.

With the new Beoplay EX, B&O has decided to switch things up in the design department – finally departing from the traditional buds-like form factor of its predecessors. In fact, the new earbuds are the first from the Danish audio brand to feature an Apple Airpods-like stem. However, unlike other similarly designed devices such as the Nothing ear (1), its touch-based controls are situated on the B&O logo on each side rather than on the stems.

As for colour options, the earbuds and their included charging case are available in either Black Anthracite, Gold Tone or Anthracite Oxygen. Those who enjoy tuning in to their favourite tracks while working out indoors and out will be delighted to know that B&O’s latest product is rated IP57 for dust and water resistance.

Yet another first for the Beoplay EX is its built-in 9.2mm audio drivers, which B&O touts as its largest ever to be featured on its TWS range. In theory, this would enable for even more power when it comes to audio delivery but as usual, this could only be confirmed once we are able to evaluate the new earbuds for ourselves.

Besides that, the audio brand says the EX also comes with Bluetooth 5.2 connectivity with two-device simultaneous pairing, improved call quality, and the aforementioned ANC capabilities. In terms of battery life, B&O says the Beoplay EX is capable of lasting up to six hours on a full charge, with a total of 20 hours of playback when used together with its charging case.

Typically of most B&O products, the new earbuds too will sport a very hefty price tag. Specifically, coming in at US$ 399 (~RM 1,697), which is considerably more expensive than most TWS that are currently available in the market. The Anthracite Oxygen colour option of the Beoplay EX is the first to ship out from 5 May 2022. Meanwhile, the Gold Tone variant will only arrive in certain markets from 27 May, whereas the Black Anthracite option is slated to be available in June. That being said, B&O has not revealed whether the new earbuds are expected to be sold in Malaysia at this time.