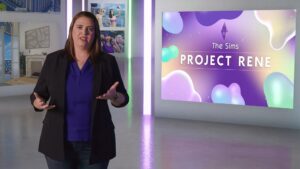 Two weeks ago, The Sims 4 went free-to-play. Around the same time, publisher EA and developer Maxis announced Project Rene, which is widely thought to be the new game in the series. Though not directly referred to as The Sims 5, there’s no reason to believed it will be called anything else as of now. Playtesting for the game started last week on 25 October, the build of which has reportedly already been cracked and pirated.

Insider Gaming claims to have seen the current playtest version of The Sims 5 being cracked and pirated. The hackers were able to generate access tokens using a playtester denuvo token, which allows anyone access to the game. This means skipping the usual sign up process required to take part in the playtesting. The hackers also managed to get the game to work with peer-to-peer servers, when such games would usually involve EA servers.

The report notes the apparent lack of encryption, which made it “real easy” for hackers to crack and pirate. Also noted is that the current playtest version of The Sims 5 runs on Unreal Engine. EA has reportedly said that it is prototyping the game on said engine, but has not confirmed if it will fully release on Unreal Engine 5.

The hacker sources to Insider Gaming did not say if they will be making public the generated codes that give access to The Sims 5 playtest. But with the game cracked in its current incarnation, chances are copies will start showing up on the internet in due time. On the flip side, if the game’s engine of all things is still not set in stone, chances are many other elements of the game are subject to change. With that in mind, even if this playtest version of the game gets spread onto the internet, the final version can be wildly different.

The post The Sims 5 Playtest Build Gets Cracked And Pirated appeared first on Lowyat.NET.