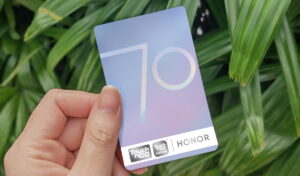 If your attempts to obtain it through normal channels such as the Touch ‘n Go (TNG) eWallet app, TNG Hub premises, and authorized petrol stations have left you empty-handed so far, here comes another way to get your hands on the Enhanced TNG NFC card: by buying a phone. Nope, we are not kidding at all.

As mentioned in our previous report, HONOR has partnered with TNG to come out with a specially themed Enhanced TNG card to mark the release of the HONOR 70 5G Icelandic Frost edition. While the colour shade might not be far off from the standard Enhanced TNG card itself, there are quite a number of logos on the card that have made it distinctively different.

Aside from that, the phone will also be accompanied by a TNG RFID sticker and a casing with a built-in card holder. Furthermore, customers will also be provided with an HONOR Band 6 and an additional 12-month warranty.

Meanwhile, HONOR has retained the pricing of the existing colourway for the Icelandic Frost edition though. Priced at RM1,999, the phone will be available through HONOR Malaysia’s website and official Shopee & Lazada stores as well as physical HONOR Store locations and authorized dealers across Malaysia starting from 28 October onwards.