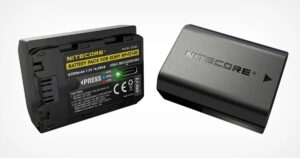 Although most cameras have now adopted the ability to charge via USB-C, owners who own multiple batteries are still required to charge them separately, through a proprietary charger nonetheless. The newly unveiled third-party UFZ100 battery for Sony cameras by Chinese company Nitecore, on the other hand, plans to remedy this by allowing users to charge it directly via USB-C.

Besides featuring a built-in USB-C port, also present on the Nitecore UFZ100 is an integrated LED charge indicator. Obviously, this lets users know of the battery’s current power levels, where red indicates the charge is below 10%, blue for below half, and green for above 50% charge.

Like the first-party batteries, the UFZ100 offers 7.2v of power delivery, but comes with slightly less charge at only 2250mAh (Sony’s have 30mAh more). In terms of compatibility, Nightcore says its battery works with the Sony Alpha 7 series, Alpha 9 and 9 II, Alpha 1, and Alpha 6600. Safety-wise, it comes with overcharge, overcurrent, and short circuit protection.

While not needing a proprietary charger is convenient, the Nitecore UFZ100’s USB charging capability does come with a slight drawback. The company notes that a full top-up will take around four hours, and it appears that the battery does not feature any fast-charging support.

Unfortunately, the company has not revealed when the USB-C equipped battery will be released, and the same can be said for its pricing as well. While third-party accessories are likely to cost less than its first-party counterparts, this added piece of innovation on the UFZ100 could potentially make it slightly more expensive. Regardless, we shall only know for sure once Nitecore is ready to confirm the battery’s pricing and availability.

The post This Third-Party Battery For Sony Alpha Cameras Charges Via USB-C appeared first on Lowyat.NET.