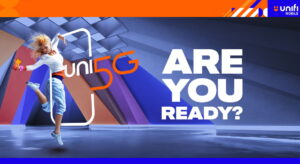 TM today has revealed the new branding for its 5G service which will be delivered through unifi Mobile. Called uni5G, the unveiling took place through several posts on unifi’s social media channels including Facebook, Twitter, and Instagram.

The company has even changed the header image for unifi’s YouTube channel to show off the new branding. At the same time, a dedicated section for uni5G has also been opened on the official website for unifi.

However, information regarding pricing and the actual rollout date for unifi Mobile 5G service is still absent from the website at the moment though. That being said, TM has previous said that unifi Mobile postpaid customers will have access to 5G and that promise is still being listed on the Ultimate Plan’s product page.

In its current state, the website only contains some graphics elements that briefly explain the advantage of 5G technology as well as coverage map which was crafted using TM One SmartMap platform. Our quick check showed that uni5G’s coverage map is generally identical to the map that is being maintained by the national 5G company, Digital Nasional Berhad on its website.

In its essence, the unveiling of uni5G today is a clear indicator that the country’s largest telco company is finally ready to offer 5G to its customers. It is a long time in the making, given that TM’s original 5G announcement for the unifi Mobile customers actually took place way back in December last year.

At the moment, unifi Mobile Postpaid Ultimate Plan costs between RM59 to RM79 per month depending on whether you are a unifi customer or otherwise. Alongside the promise of 5G access, it also comes standard with a 10GB LTE hotspot quota in addition to having unlimited data, calls, and SMS.

The post uni5G: This Is The New unifi Mobile Branding For 5G appeared first on Lowyat.NET.