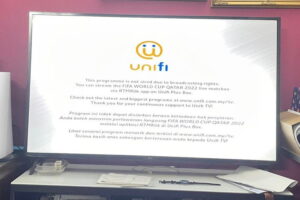 Being one of the free-to-air channels that are available under unifi TV, some users out there might be under the impression that they can still catch FIFA World Cup Qatar through the IPTV service via RTM’s TV2. Unfortunately, that is not the case though.

Before we go further, here is some context to the story: around a week after RTM announced its status as one of the official broadcasters for World Cup 2022 in Malaysia, we reached out to TM whether it is able to show the event through unifi TV since TV2 is part of its channel line-up. At that time, the company said that it has nothing to announce and we did not receive any updates from TM regarding the subject since then.

All was then revealed when the first match of World Cup Qatar kicked off last night. In a set of images shared by Lowyat.NET reader Lee Chee Sheng, the broadcast on TV2 was blanked out with a confirmation notice that unifi TV was not able to show the match due to broadcast rights just like in 2018 and 2014.

As shown by these images, this blackout affected both the unifi Plus Box and playTV@unifi mobile apps. It is something we have generally expected though, given the lack of World Cup-related promotion from TM’s side as the company would have used the opportunity to widen unifi TV’s reach in the market.

That being said though, all was not lost for unifi TV customers if they have the unifi Plus TV box regardless of the original or 2nd generation model. As pointed out by the blackout message, they still can watch FIFA World Cup Qatar 2022 by downloading the RTMKlik app from Google Play as these boxes run on the Android TV operating system.

As noted in our how-to guide yesterday, the public can catch 41 out of 64 matches from the event for free online via the RTMKlik website and apps. That being said, do note that only 27 of them will be shown live through RTM channels although the grand final match on 12 December is already included in the list.

If you want to catch all 64 matches from FIFA World Cup Qatar online without subscribing to Astro, the only official option you have is through Astro’s subsidiary, Sooka. Unfortunately, the service’s Android TV app is only available for selected Sony and Sharp models which means you can’t install the app on the unifi Plus TV box.

The post unifi TV Once Again Does Not Have The Rights To Show RTM’s FIFA World Cup Broadcast appeared first on Lowyat.NET.