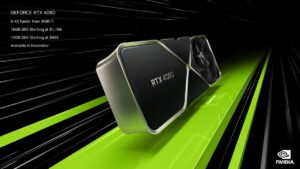 NVIDIA surprised the gaming world last month when it made the executive decision to “unlaunch” its GeForce RTX 4080 12GB, a card that was clearly mired in controversy and negative reaction, primarily over its name. Now, rumours suggest that its parent company will rebrand it as the RTX 4070 Ti.

Rumours of the RTX 4070 Ti renaming came was first posted by the internet’s favourite and most prominent hardware rumour monger kopite7kimi (@kopite7kimi), who simply tweeted the statement as is. Additionally, when asked if NVIDIA would be launching the card in January 2023, they merely responded with a thumbs-up emoji. If that is to be taken seriously, then it is likely the card will be launching during CES 2023, which is set to kick off at the start of that month.

Beyond that, the leakster provided no further information about the RTX 4070 Ti, at least not information that we don’t already know.

NVIDIA’s decision to rename the RTX 4080 12GB as the RTX 4070 Ti is one that actually makes a lot of sense; the GPU brand was initially criticised for doing so, particularly because the card was so different from the 16GB variant of the card at launch. Specs-wise, the card had 12GB GDDR6X graphics memory, a 192-bit memory bus, 60 SM processors, 240 Tensor Cores, and 60 RT Cores. Additionally, it had a base and boost clock of 2.31GHz and 2.61GHz respectively, while its memory bandwidth was set at 504GB/s, and even had a TDP of 285W.

As for pricing, the RTX 4080 12GB was supposed to retail at a starting price of RM4730. At this point, there is no information or indication of whether NVIDIA intends of maintaining that pricetag but considering how its rival, AMD, recently announced its flagship Radeon RX 7900 XTX and XT cards, and their starting price of US$899 (~RM4240), reducing the cost of the card, should it launch as the RTX 4070 Ti in January next year, might be a necessary move, more so if it wishes to fill up its coffers.