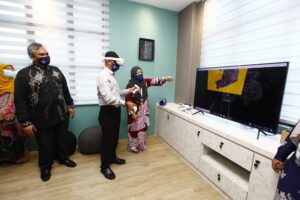 The Metaverse is among the hottest buzzwords around ever since Facebook changed its name to Meta. So it’s no surprise that there’s something new that makes use of the word. The latest one is the virtual library in medicine at the Institute of Advanced Medicine and Dentistry (IPPT) of Universiti Sains Malaysia, which is called the Metaverse Spatial Library.

According to Bernama, the library makes use of VR tech and a 3D data management system. The system transforms reference materials in the library like images, anatomical models, electronic books, documents and others in 3D. This is then accessed on a web portal called GoVR via a specialised headset in the IPPT library.

USM Vice-Chancellor Faisal Rafiq Mahamad Adikan says that VR tech had vast potential, and that it was making inroads in the mainstream of technology, as reasons why VR was introduced to the university. He also says that the initiative, known as WebVR, will improve the “effectiveness of teaching and training conducted at USM”.

“In terms of education, Metaverse can be a learning and teaching platform that includes all information and entertainment integrated in the three-dimensional world”, he adds. While this may be true, it remains to be seen what this library’s offering has that goes beyond conventional VR for the Metaverse name to be the more appropriate one.

The post USM Now Has A VR Library In Medicine appeared first on Lowyat.NET.