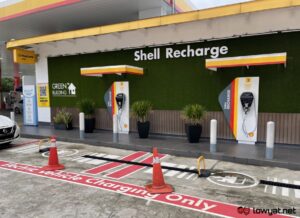 Soon after the Malaysia-Singapore borders were opened again earlier this month, tons of reports regarding Singaporeans illegally pumping Malaysia’s subsidized RON95 fuel into their vehicle began to make their way online. As if that was not enough, a Singapore-registered EV was recently caught charging on a commercial EV charger service without paying for it.

In case you feel that it is weird that one needs to pay to charge their EVs, then it is likely that you have not been introduced to the Shell Recharge service. There are several Shell Recharge locations in Malaysia with most of them located within the Klang Valley.

Shell Recharge network in Malaysia also includes the High Performance Charging (HPC) stations that provide 180kW DC fast chargers (DCFC) to users. However, only one HPC is operational so far – located in Tangkak – which was where the incident took place, as first reported by Paul Tan.

The fee that Shell Recharge stations imposed on users is not based on the amount of electricity that they utilize. Instead, it is based on how long they occupy the charging bay and when users want to charge their EV at a Shell Recharge station regardless of standard charger or HPC, they have to first unlock the bay by using the ParkEasy app.

So, this is the first flaw of a Shell Recharge station: the charger does not require authentication. Instead, it relies on the Automatic Parking Barriers (APBs) as the gatekeeper which we don’t think is great at its job.

The APBs are usually installed in the centre of each charging bay but when there are multiple bays next to each other, there would be gaps between each APBs due to their compact footprint. These gaps are generally large enough to fit a vehicle between them.

To further highlight our point, we rented a 2019 Nissan Leaf from GoEV and drove it to the Shell Recharge station at Shell Mint Hotel station in Sungai Besi to try replicating the Tangkak incident. In fact, the layout of the charging bays at Shell Mint Hotel made it even easier to perform the “trick” and generally requires no effort at all.

Even though this view might looked great to those whose thriftiness have no limit but this does not mean it can done in real life. As you can see in the image above, Shell Mint Hotel have vigilant staff that are around to provide assistance to Shell Recharge customers, so you would be caught immediately if you tried to pull off any nonsense there.

Then again, other Shell Recharge stations and ParkEasy-installed EV chargers may not be manned in that manner which it made us wonder: why not eliminate the problem right at the infrastructure itself? Perhaps, a bigger barrier or synchronize the activation of the charger with the barrier itself.

Since the report didn’t come include any backstory behind it, some may say that what happened in Tangkak could be due to non-functioning barrier which sounds like a plausible reason. Then again, based on the response from Shairan Huzani Husain (known by many as Pakcik Shell), the Managing Director of Shell Malaysia Trading Sdn Bhd on his Instagram page, we doubt that is the case.

We don’t condone such irresponsible behaviour and our intention to replicate the flaws is not to encourage anyone to take advantage of them as we believe that EV owners in Malaysia have much higher standards to match with the state-of-the-art EVs that they are driving. It is solely to highlight those flaws to Shell Malaysia and ParkEasy which we hope will implement some solutions in the near future.

Just like what Pakcik Shell (Shairan’s legendary nickname) has pointed out in his Instagram post, there is a need to encourage more companies to invest in infrastructure for future mobility. Since there have been some positive signs in Malaysia’s EV space as of late with several new models from reputable brands have made their way here and EV assembly plants are being established as we speak (Volvo has even start releasing CKD EV), so we certainly don’t want the momentum to be negatively affected by misuse of EV infrastructure.

The post We Try To Replicate The Flaws At Shell Recharge Station, As Revealed By Irresponsible Singaporean EV appeared first on Lowyat.NET.