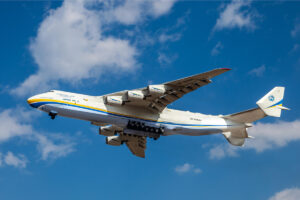 The world’s largest aircraft, the Antonov An-225, has been destroyed during the recent Russian advance in Ukraine. Its destruction was confirmed by the latter’s minister of foreign affairs Dmytro Kuleba via Twitter earlier today.

According to CNN, the loss of the Antonov An-225 was reportedly part of a Russian attack on Hostomel Airport near Kyiv, Ukraine’s capital city. While the cause of its destruction was not made clear, satellite images from Maxar Technologies show significant damage to part of the hangar in which the aircraft is stored. Additionally, NASA’s Fire Information for Resource Management System reports that a fire took place at the hangar at 11:13 am (7:13 am local time) on Sunday.

Also known as “Mriya”, which means “Dream” in Ukrainian, the six-engine An-225 was designed by Ukraine’s Antonov Design Bureau during the 1980s when the country was still part of the Soviet Union. Interestingly, it was initially built to transport Buran-class space orbiters, which were the Soviet’s counterpart to NASA’s space shuttles.

After the Union’s fall, the aircraft was later refurbished and reintroduced into commercial operation under Antonov Airlines, tasked with transporting oversized payloads. Prior to its destruction, the An-225 was recently used to deliver COVID-19 medical supplies to various countries.

“Russia may have destroyed our ‘Mriya’,” Dmytro Kuleba tweeted. “But they will never be able to destroy our dream of a strong, free and democratic European state.”

This was the world’s largest aircraft, AN-225 ‘Mriya’ (‘Dream’ in Ukrainian). Russia may have destroyed our ‘Mriya’. But they will never be able to destroy our dream of a strong, free and democratic European state. We shall prevail! pic.twitter.com/TdnBFlj3N8

It is also worth noting that a second model of the aircraft was planned, but its construction was ultimately halted due to lack of funding and interest. According to website RUaviation, sources claim that the would-be sister model to the Mriya was up to 60-70% completion as of 2009. There have been mullings on restarting the project by the Ukraine government, but none of which have ever materialised.