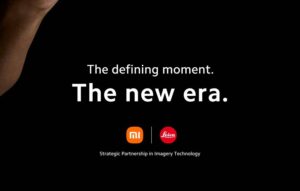 Xiaomi and Leica officially announced a new long-term partnership, signalling what could be the end of the latter’s exclusive relationship with Huawei. In conjunction with the announcement of its partnership, both companies also announced that they will debut a new smartphone, complete with Leica’s imaging technology, in July this year.

At this time, Neither Xiaomi nor Leica is disclosing any further details of their new product, the only hint towards its new darling being the poster that is attached to the official press release. While we don’t like making grand assumptions, the placement of the right hand in the poster seems to suggest that Xiaomi’s next phone could come with a dedicated shutter button; At present, Sony is the only smartphone brand that still ships out its flagship devices with the button.

Therefore, if Xiaomi’s banner is suggesting what we think it looks like, Sony could then be facing some stiff competition, come July.

The partnership between Xiaomi and Leica is nothing short of surprising, though it isn’t all that shocking. Again, prior to the announcement, Leica had long been in a relationship with the other major Chinese smartphone brand, Huawei. That said, there were reports over the past couple of years, signalling the coming end their partnership, with Huawei having expressed its desire to take on a new imaging brand (read: Sharp) as its new partner.

Having said that, Huawei itself still hasn’t made any major announcement or released any official statement to indicate that both it and Leica have called it splits and to that end, the two brands may still continue to work together and release new devices, just not in the long exclusive relationship that many of us have known since the launch of the P9.