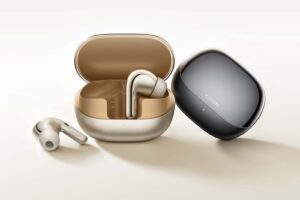 Alongside its bleeding-edge foldable, Xiaomi has also launched a new set of earbuds called the Buds 4 Pro. The successor to last year’s Buds 3T Pro, the latest audio offering from the Chinese tech giant comes with a striking design, as well as improved ANC and several other new features.

While the buds themselves look pretty familiar, the interior design of the case has taken a form that we haven’t seen before with the earbuds being fully exposed when you open it up. The buds themselves which have IP54 water and dust resistance rating, feature 11mm drivers and run on a 12nm chip that provides them with Bluetooth 5.3 support.

The Buds 4 Pro also support the LHDC 4.0 codec and 96kHz audio, though these are only enabled when paired with selected Xiaomi flagship phones, including the Mix Fold 2, 12S Ultra, and 12 Pro. Xiaomi also claimed that these audiobuds offer better adaptive ANC with the ability to reduce noise by up to 48dB and can reach a noise reduction bandwidth of up to 4000Hz.

When it comes to hearing your surroundings, the Buds 4 Pro are equipped with three levels of a transparency mode, as well as a bone voiceprint sensor for better noise reduction during calls. Interestingly, they also have an independent spatial audio capability that can work with any phone through the Xiaomi Headphone app, though the app is not currently available on iOS.

The earbuds also have a battery life of nine hours on a single charge with ANC turned off, while using the case’s 565mAh battery gives users a total playback time of 38 hours. Xiaomi said that charging them for three minutes can give you an additional three hours of battery life, with the case also supporting wireless charging.

Available in gold and black colourway options, the Xiaomi Buds 4 Pro retail for CNY1,099 (~RM724). While it is already available in China, the company has not announced pricing and availability for international markets just yet.