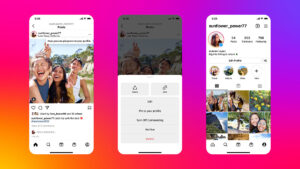 Instagram has recently rolled out several new features which are now readily available to all users on the platform. One of such, and a definite highlight from the list, is the ability to pin content onto your profile page.

The additions were revealed by Instagram head Adam Mosseri via his usual video announcements on Twitter. Besides the aforementioned function, which is called Grid pinning, other new features introduced by Mosseri consist mainly of improvements to Reels. These include a longer 90-second cap, interactive stickers, and the ability to import audio to a clip.

“Your profile is your place, so we’re looking for more ways to give you control over that experience,” the Instagram head said in regards to Grid Pinning. Indeed, this new feature would benefit users – especially content creators, as it allows them to highlight their best or memorable work on their grid. According to the platform, users can pin up to three images or Reels video clips, which will sit on the top row of their profile page.

You can now choose up to three posts or Reels to pin to the top of your profile. pic.twitter.com/9waQkueckG

To utilise Grid Pinning; simply select a photo or video clip, tap on the three dots icon on the upper right-hand corner and then select “Pin to your profile.” Pinned content is aptly labelled with a small pin icon, which is visible to both you and your followers.

The increased 90-second cap, which was first discovered by reverse engineer Alessandro Paluzzi earlier this year, appears to be a necessary update in order for Instagram to directly compete with competitors such as TikTok and YouTube. Meanwhile, the ability to import audio to a Reels video clip is a feature that has been much requested by users, Mosseri says. Lastly, the new interactive stickers feature lets you add emoji sliders, quiz and poll stickers, and much more to your video clips – providing you with more tools to engage with your audience and followers via Reels.

Some fun, new features built for creators that make it easier to engage and share:

Let me know what you think

See you next week

As mentioned earlier, all these new features are now available to all Instagram users around the world. Of course, make sure that you have the app updated to the latest version in order to enjoy the new additions.